Rex Watson in Local Population Studies 15 sampled a group of eight contiguous Cambridgeshire parishes. He did this by extracting the occurrences of the top 50 surnames in each parish and allocating these to three separate periods, 1538-1640, 1641-1740 and 1741-1840.

It was then possible to compare the number of surnames common to each parish, and to compare periods. The result gave an idea of how names survived or spread over time in these parishes. A comparison was also made with the Lancashire chapelry of Colne. Another technique used in this article was to take names common to pairs of parishes and graph these against the distance apart. Not surprisingly, it was found that the number of names common to pairs of parishes tends to decrease, as the distance apart increases.

(Source: Rex Watson A study of surname distribution in a group of Cambridgeshire parishes, 1538-1840 in Local Population Studies 15.) 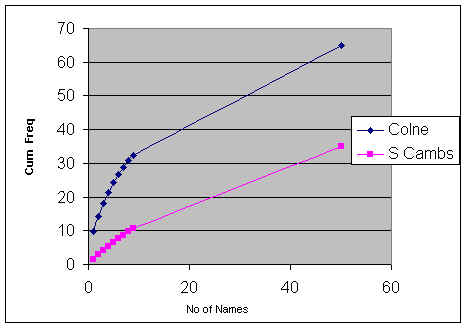 This higher number of holders of a particular name probably meant a higher survival rate in Lancashire. Is the inference that Lancashire names are more stable than Cambridgeshire ones?

Grace Wyatt has reconstituted the parish of Nantwich and has studied the relative persistence of its surnames:

(Source: Grace Wyatt Population change and stability in a Chesire parish during the Eighteenth Century in Local Population Studies 43, 1989).

Surname losses (other than migration):

“… for most of the period under review, the population was barely replacing itself. The average family size was only 4.33 children, and as infant and child mortality together was approaching 500 per thousand in each generation, it may be predicted that something like one quarter of all families would not have had sons of marriageable age to carry on the name. However, this event would not automatically mean the disappearance of a name as more than one family might have possessed it.”

“The study of surnames [in this parish] has shown that whilst there is a great deal of change among surnames over time, some surnames persist over long periods”.

Such a stable core though not very large, could still be detected.

Betty Halse is researching population mobility in the moorland village of Levisham in North Yorkshire. Local Population Studies 65 contains an interim report on this historically significant community of small farmers. A by-product of her research has been the identification of core families in the parish over a long period 1541 to 1881.

The rate of introduction of new names into the parish records for each 50-year period (1541-1800) ranged from 17 to 24. For 1801-1850, it doubled to 45. New names appeared in the parish following the 1770 Enclosure award, as “a new style of farming developed which required both new capital and new ideas, and this attracted new men who were not rooted in the village in the way their predecessors had been.”

At the other end of England, Barry Stapleton in his study of the Hampshire parish of Odiham discerns a tendency for low fertility and high infant mortality to result in a higher chance for a single surviving offspring to succeed to the whole of their parent’s property. High fertility and low infant mortality might result in a partible inheritance, and over several generations, a decline in that family’s fortunes, and therefore might propel the family out of an area.

Which of the above factors most influenced the stability of a core family in a region, the flexibility to respond to outside factors, e.g. a changing economic environment, or the more personal factor of fertility rate?

THIS IS A DEFAULT WIDGET WHICH SHOULD NOT DISPLAY. DO NOT DELETE THIS.